The best way of dealing with waste, both economically and environmentally, is to avoid creating it in the first place. For effective waste management, waste minimization, reuse, recycle and energy recovery are more sustainable than conventional landfill or dumpsite disposal technique. 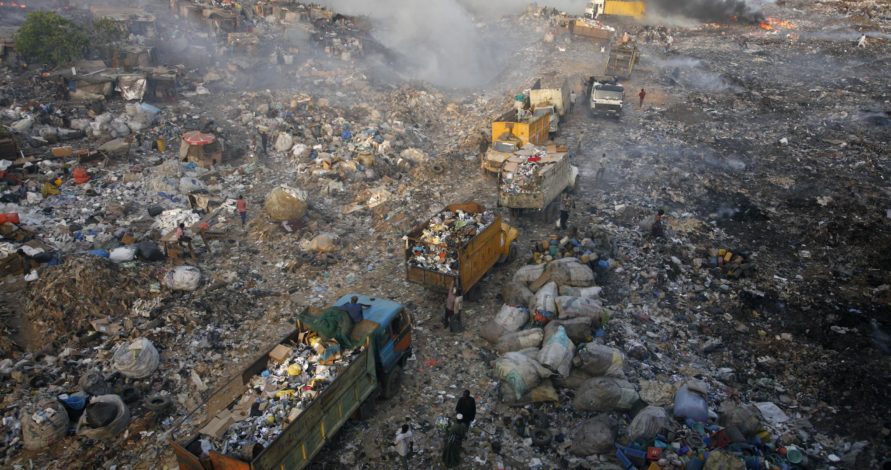 Olusosun is the largest dumpsite in Nigeria

Reuse means using an item more than once. This includes conventional reuse where the item is used again for the same function and new-life reuse where it is used for a new function. For example, concrete is a type of construction waste which can be recycled and used as a base for roads; inert material may be used as a layer that covers the dumped waste on landfill at the end of the day.

Recycling of waste involves reprocessing the particular waste materials, including e-waste, so that it can be used as raw materials in another process. This is also known as material recovery. A well-known process for recycling waste is composting, where biodegradable wastes are biologically decomposed leading to the formation of nutrient-rich compost.

As far as waste-to-energy is concerned, major processes involved are mass-burn incineration, RDF incineration, anaerobic digestion, gasification and pyrolysis. Gasification and pyrolysis involves super-heating of municipal solid waste in an oxygen-controlled environment to avoid combustion. The primary differences among them relate to heat source, oxygen level, and temperature, from as low as about 300°C for pyrolysis to as high as 11 000°C for plasma gasification. The residual gases like carbon dioxide, hydrogen, methane etc are released after a sophisticated gas cleaning mechanism.

MSW incineration produce significant amounts of a waste called bottom ash, of which about 40% must be landfilled. The remaining 60% can be further treated to separate metals, which are sold, from inert materials, which are often used as road base.

The above mentioned techniques are trending in many countries and region. As of 2014, Tokyo (Japan) has nineteen advanced and sophisticated waste incinerator plants making it one of the cleanest cities. From the legislature standpoint, the country has implemented strict emission parameters in incinerator plants and waste transportation.

The European Union also has a similar legislature framework as they too faced similar challenges with regards to waste management. Some of these policies include – maximizing recycling and re-use, reducing landfill, ensuring the guidelines are followed by the member states.

Singapore has also turned to converting household waste into clean fuel, which both reduced the volume going into landfills and produced electricity. Now its four waste-to-energy plants account for almost 3% of the country’s electricity needs, and recycling rates are at an all-time high of 60%. By comparison, the U.S. sent 53% of its solid waste to landfills in 2013, recycled only 34% of waste and converted 13% into electricity, according to the US Environmental Protection Agency.

Since the municipal solid waste can be a mixture of all possible wastes and not just ones belonging to the same category and recommended process, recent advances in physical processes, sensors, and actuators used as well as control and autonomy related issues in the area of automated sorting and recycling of source-separated municipal solid waste.

Automated vacuum waste collection systems that are located underground are also actively used in various parts of the world like Abu Dhabi, Barcelona, Leon, Mecca and New York etc. The utilization of the subsurface space can provide the setting for the development of infrastructure which is capable of addressing in a more efficient manner the limitations of existing waste management schemes.

Waste management is a huge and ever growing industry that has to be analyzed and updated at every point based on the new emergence of threats and technology. With government educating the normal people and creating awareness among different sector of the society, setting sufficient budgets and assisting companies and facilities for planning, research and waste management processes can help to relax the issues to an extent if not eradicating it completely. These actions not only help in protecting environment, but also help in employment generation and boosting up the economy.

Salman Zafar is the CEO of BioEnergy Consult, and an international consultant, advisor and trainer with expertise in waste management, biomass energy, waste-to-energy, environment protection and resource conservation. His geographical areas of focus include Asia, Africa and the Middle East. Salman has successfully accomplished a wide range of projects in the areas of biogas technology, biomass energy, waste-to-energy, recycling and waste management. Salman has participated in numerous national and international conferences all over the world. He is a prolific environmental journalist, and has authored more than 300 articles in reputed journals, magazines and websites. In addition, he is proactively engaged in creating mass awareness on renewable energy, waste management and environmental sustainability through his blogs and portals. Salman can be reached at salman@bioenergyconsult.com or salman@cleantechloops.com.
View all posts by Salman Zafar →
Tagged Automated Waste Collection, European Union, gasification, How to Achieve Effective Waste Management, Incineration, IoT, Japan, Municipal solid waste, Singapore, Vacuum Collection, Waste Minimization, Waste Reuse. Bookmark the permalink.